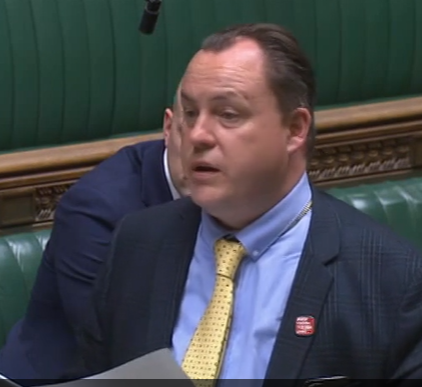 I was proud to bring a debate to the floor of the House on plans for mass DWP office closures.

The announcement in March means that thousands of staff at the DWP now face the risk of possible redundancy.

These are the same public servants we clapped for during the pandemic as they kept the country running and got crucial lifeline support into people’s pockets.

How has the DWP rewarded these hard-working public servants? Unfortunately, with the announcement of 43 office closures and the job losses, which will almost certainly follow.

These devasting announcements will be very worrying for many families at a time people are already facing the pressures of a Tory-made cost of living crisis.

I am also concerned that these announcements – which follow the previous closures under the people and locations programme – could devastate services and delivery for staff, service users and the communities they serve. And, of course, the severe impact on communities threatened by job losses cannot be underestimated.

In March, when the Government was dragged to the House to make these announcements, there was 1,118 staff at sites that would close without their work being consolidated in the area. And 7341 staff at locations where the work is consolidated into other sites.

Following these announcements on March 17, I secured an urgent question on this matter. Then I called for the planned closures and redundancies to be categorically ruled out.

I demanded to know whether economic and equalities assessments had been made on the closures, many of which are occurring in high economic deprivation areas, and warned that many staff members, particularly those with disabilities, may not be in a position where they can work from other offices.

Yet, the DWP’s swiftness in moving to issue “at risk of redundancy” letters to the staff at 25 sites further shows why the PCS Union is vindicated in believing that jobs will be lost because of these closures and that the Government is not listening to concerns.

Nearly three months on, I found myself putting the same points and questions to the Government after their failures to answer the workers’ concerns so far thoroughly.

I also made clear again that I do not believe these closures should go ahead and would encourage the Government to urgently listen to the concerns of MPs, staff and trade unions and do the right thing and scrap the closures.

Copyright 2023 | All Rights Reserved | The costs of this website have been met out of parliamentary resources.