This week I received thanks from a grassroots campaign group Stand with Hong Kong for adding my name to a House of Commons Motion that highlights abuses of human rights by the Hong Kong police.

The motion asks the British government to raise with the United Nations the human rights abuses unfolding routinely in Hong Kong, given their serious implications for the wider world.

The motion highlights the testimony of a humanitarian medical worker to a recent parliamentary briefing and expresses concern about “the arrest and public humiliation of those providing medical assistance to the injured” and observes that “the failure of the international community to condemn [human rights] breaches by the Hong Kong police” could set a precedent that puts lives of humanitarian aid providers at risk around the world.

Campaign group Stand with Hong Kong explained that “this motion encapsulates the anxieties that plague the city of Hong Kong and the threat this crisis poses to the wider world. If Hong Kong authorities disregard international humanitarian and medical workers as this motion outlines, imagine how badly they are treating their own people who they regularly refer to as cockroaches and the international human rights definitions they have openly disregarded. We are grateful to the MP for standing with Hong Kong by supporting the motion”. 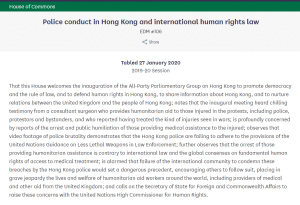